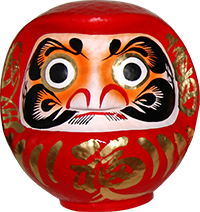 Daruma is a traditional handmade wishing doll made in Japan.
And it is the most popular good luck charm in Japan.
Much of the daruma is purchased in the market, which opens around January.
The buyers take it home and put it hoping to be happy for a year.
It is also common that companies buy dolls for prosperous business, or election offices buy them to win elections.
Then in the next year, someone keep their daruma, but someone dedicate it to temple or shrine and buy a new daruma again.
Of course, daruma dolls are sold all year round, so anyone can buy them at the store.

Daruma dolls are now widely purchased around the world besides for personal use, such as birthday present, wedding present, souvenir of the completion of Japanese martial arts, and mascot of ceremonies or events. 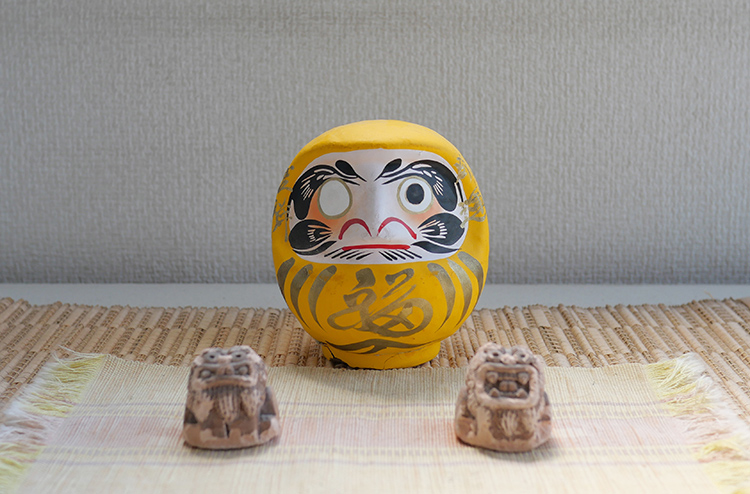 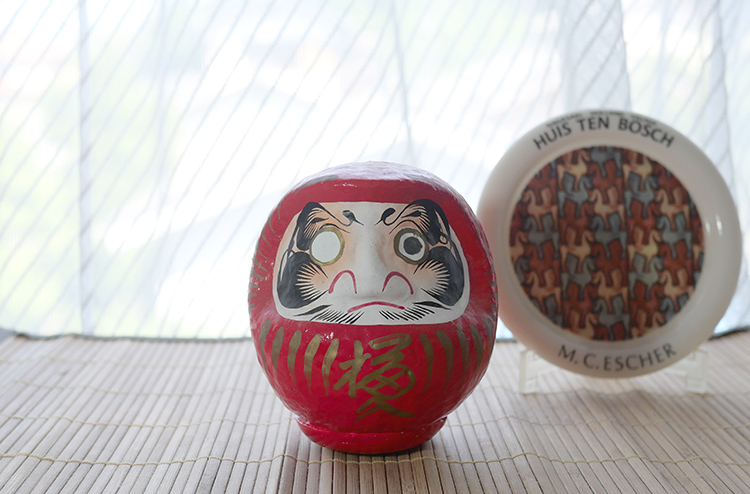 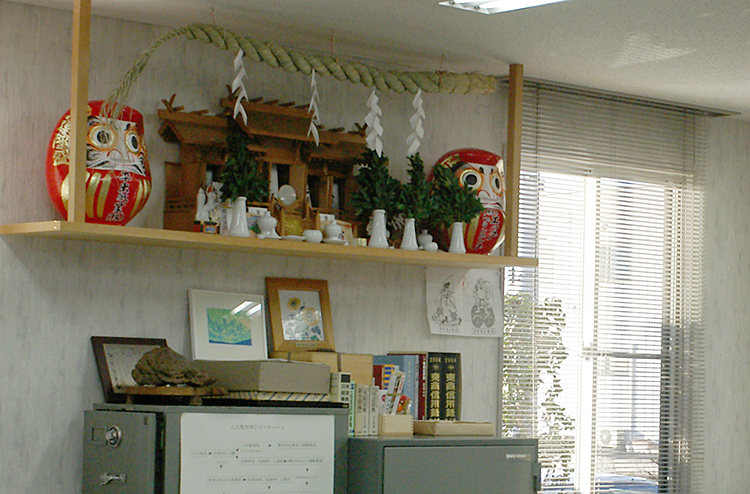 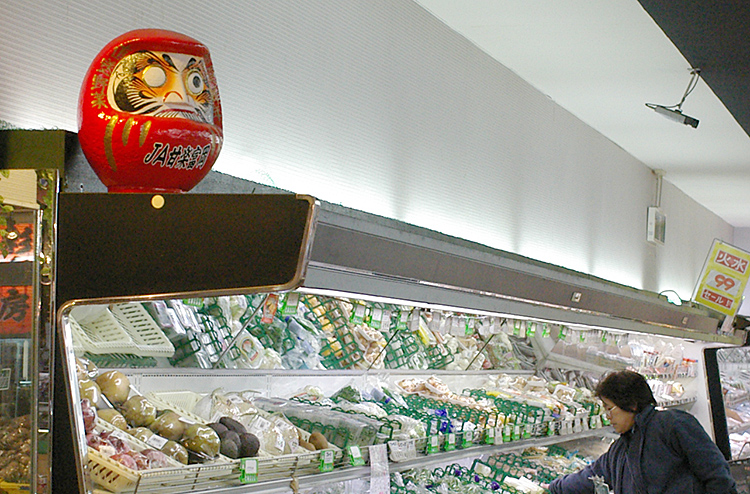 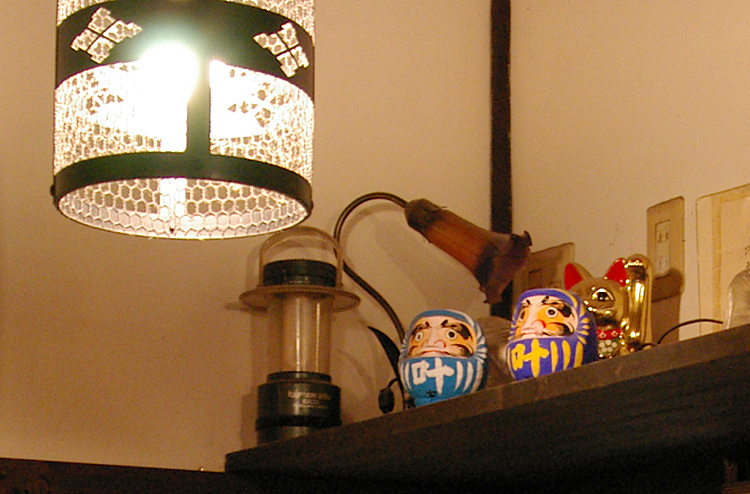 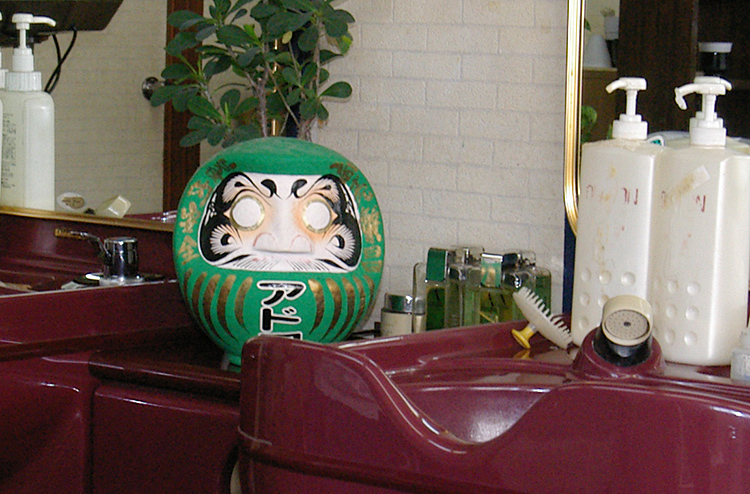 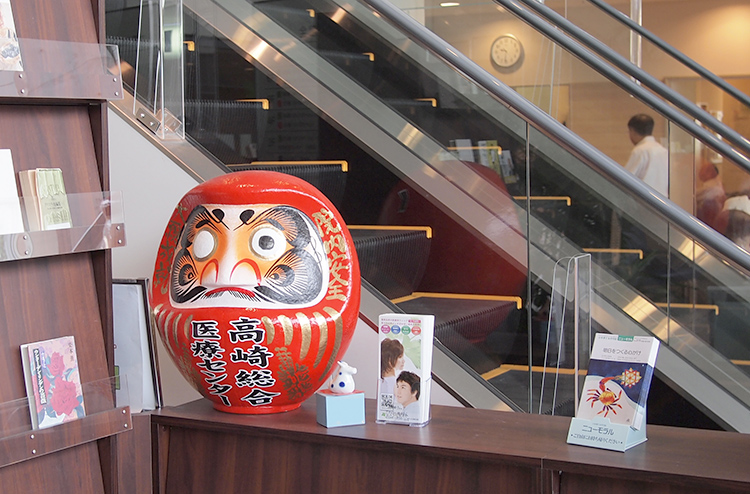 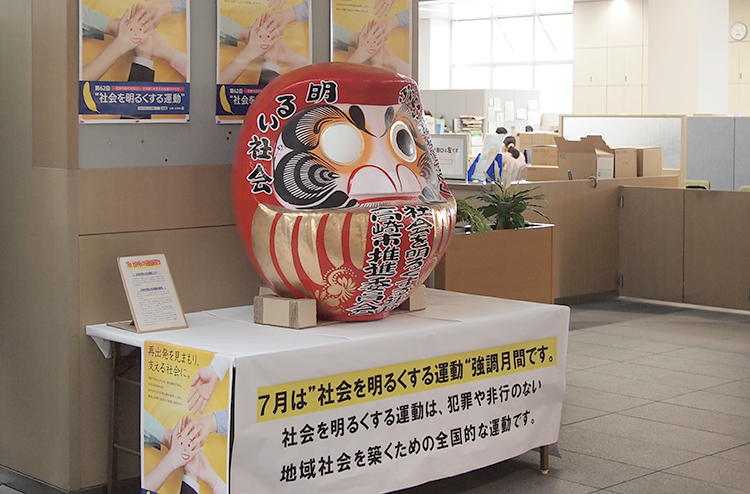 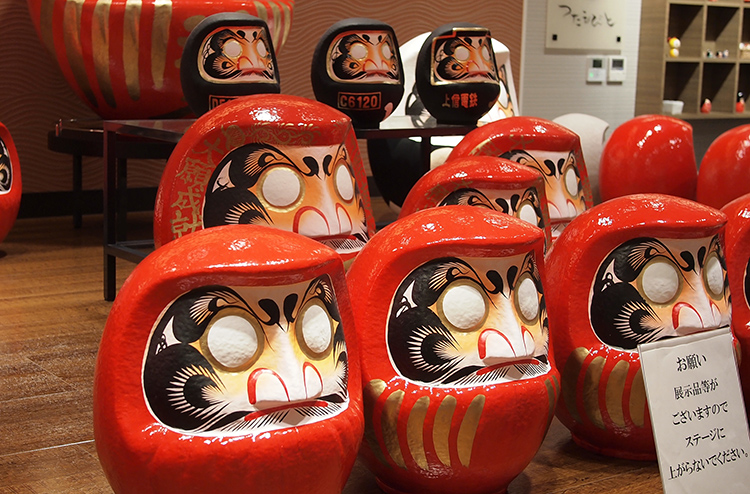 Daruma symbolizes meditation of Bodhidharma - Founder of Zen Buddhism.
The rounded shape also shows tenacity that if it fall down seven times, get up eight. (actual dolls do not have this behavior.)
Daruma is made of paper mache. and red is the traditional color.

On the bottom of daruma the letter Fukuiri is written.
That means here is happiness in it.
This design is also called Fuku daruma or Fukuiri daruma.
For large size dolls, this part can be freely rewritten with an optional order. 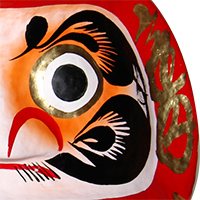 The eyebrows represent a crane and the beard represents a turtle's tail.
In Japan, as a proverb it is said that cranes live 1000 years and turtles live 10000 years, and they have been used in design since ancient times as a symbol of celebration.
For large size dolls, in the part corresponding to the ear, wishes are written such as family safety, fulfillment of wishes, and prosperous business.

How to make a wish

Making a wish is easy, just put one eye on the daruma.
First of all, think about the purpose such as family happiness or prosperous business.
Then draw one of daruma's blank eyes in black with your wishes.
This work does not have to be rigorous one like having a strong feeling of wishing results.
Instead, it's a common practice to be excited and casual.
It's just like winding a missanga or buying a lottery ticket.

In about the 5th century,at the cave of South China, Bodhidharma - Founder of Zen Buddhism - enlightened at the end of Zazen - sitting not to speak toward a wall - for nine years.
There is a legend that he lost his limbs by performing Zazen, and derived from this, Daruma dolls were made in the shape without limbs.
On the other hand, the origin of Daruma lies in the doll "Futouou - bùdǎowēng", it gets up even if it knock down by putting an earth weight near the rounded bottom to lower the center of gravity.
This was handed down to Japan during the 14-16th century, and "Okiagari-koboshi" were created.
It is presumed that Daruma like today was born in the 18th century, and that Daruma's Zazen figure was copied to a Okiagari-koboshi it would rise even if he fell down, and it is speculated that it had an indomitable feeling.

In 1667, Zen Master Shinetsu built a Daruma-ji temple at Mt.Shorinzan in Takasaki. 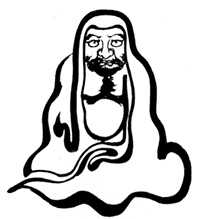 He drew a Zen meditation image of Bodhidharma.
It came to be distributed at new year's days, and it is assumed that it is a start of the Takasaki Daruma.
In other words, it is the origin of Japanese Daruma.
Afterwards in the 19th century, Tomogoro Yamagata made an initial Daruma doll putting Japanese papers on a wooden mold carved by Priest Togaku.

In the 19th century (Meiji period), the sericulture industry flourished, Daruma dolls were asked by those who prayed to harvest a lot of silk.
And in the present age, Daruma doll became indispensable as a target prayed for the business prosperity. 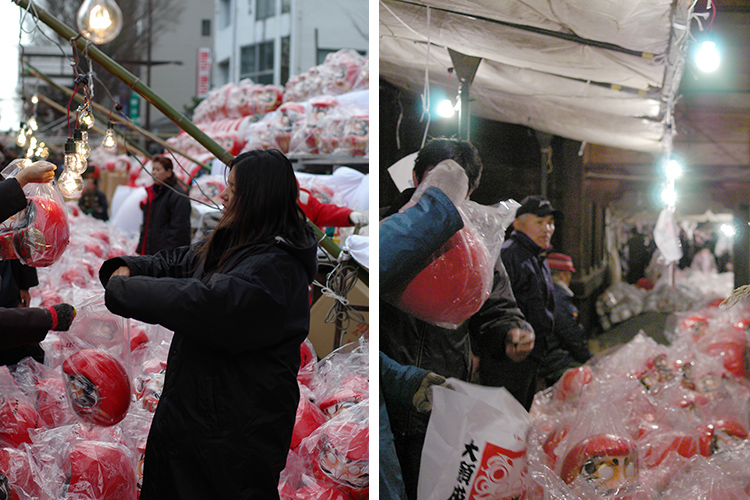 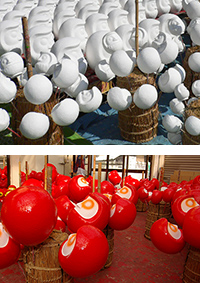 In Japan, about 80% of Daruma dolls are made in Takasaki City.
Takasaki City is a local city in Gunma Prefecture located almost at the center of Japan.
Sericulture was an active here for a long time.
There is a Daruma-ji temple at the Mt.Shorinzan in Takasaki City, and the fair is held on January.
It crowds with many people who buy the Daruma doll from all over Japan. 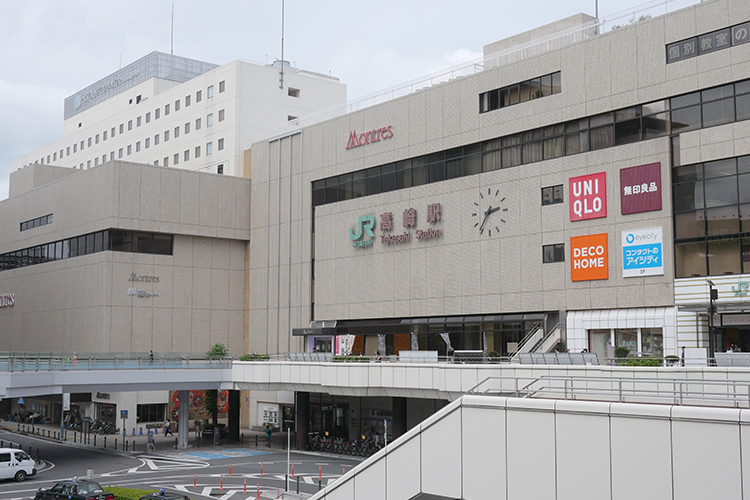 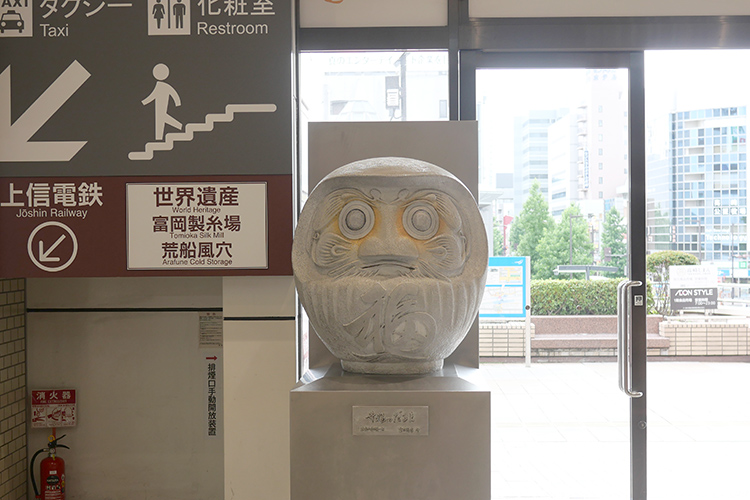 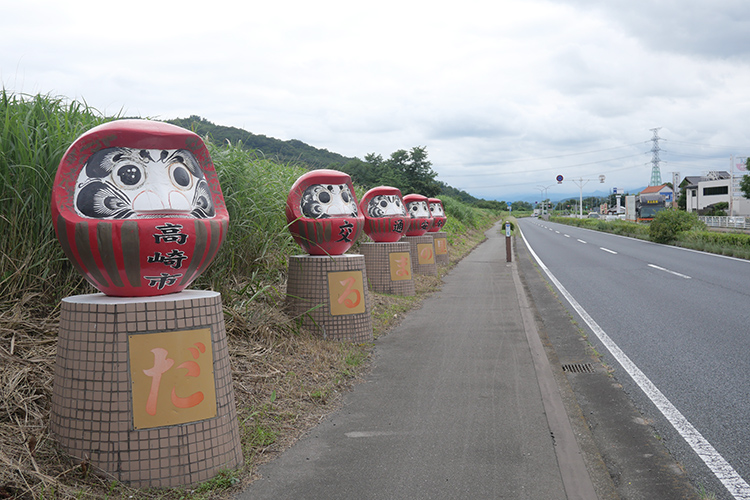 What are color meanings of Daruma dolls?

Today, in addition to traditional red, there are many different colors of Daruma dolls.
These are recently released, and the meaning given to each color varies depending on the store.
Actually, each color does not have a deep meaning, so you can choose your favorite color.
For reference, the colors and their meaning are:

Why does Daruma doll have one eye?

The eyes of Daruma doll are blank when sold as a means to keep track of goals or big tasks and motivate them to work to the finish.
The recipient of the doll fills in one eye upon setting the goal, then the other upon fulfilling it.
In this way, every time they see the one-eyed Daruma, they recall the goal.
One explanation how this custom started says that in order to motivate Daruma-san to grant your wish, you promise to give him full sight once the goal is accomplished.
This practice might also have something to do with the "enlightenment", the ideal attainment of Buddhism.
Referring to "opening" the second eye, it expresses the realization of a goal.

Which eye do you fill in first on a Daruma doll?

Many sources say that you should color the left eye first.
The left eye means the doll’s left eye, not the eye that is on your left as you face him.
However, there is no correct order of painting eyes of a Daruma doll.
This is written on the site of Gunma Daruma Doll Manufacturers’Cooperative Union in the birthplace of Takasaki Daruma doll.
Drawing eyes signifies “opening of a Daruma doll’s mind’s eye”, not just filling in the blank eyes.

What are Daruma dolls made out of?

Daruma dolls are usually made of recycled paper - papier-mâché.
Papier-mache literally "chewed paper", "pulped paper", or "mashed paper" is a composite material consisting of paper pieces or pulp, sometimes reinforced with textiles, bound with an adhesive, such as glue, starch, or wallpaper paste.
The base of Darurma doll is completed by placing the mold in a tank of paper melted, sucking out the moisture with a compressor, taking it out when it hardens, and drying it in the sun.

What are Japanese good luck charms?

In addition to Daruma, there are some good luck charms in Japan.